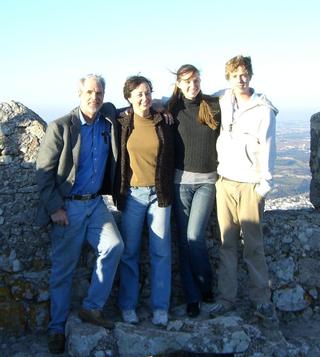 With my family in Portugal. At 5'10" I'm not used to feeling short, but these people tower over me! 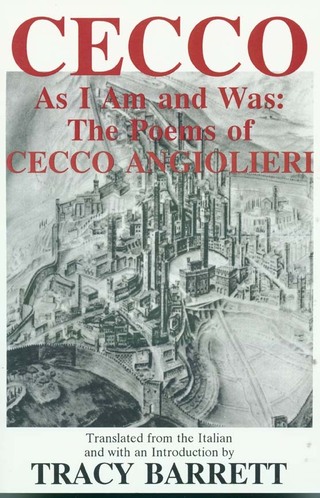 I wrote my doctoral dissertation on the medieval Italian poet Cecco Angiolieri. 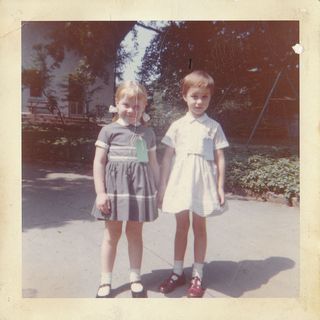 My first day of school with my best friend, Cathy. She's still a good friend. 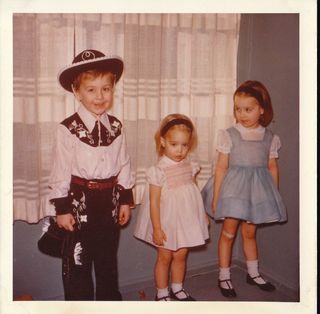 With two of the most important people in my life, Andy and Laura 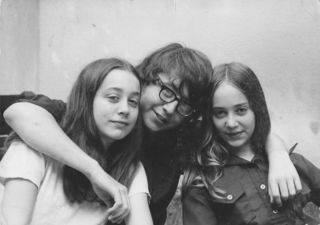 Here we are again, in high school. 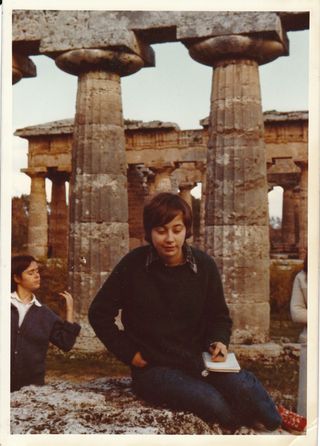 In Sicily during my college year in Italy 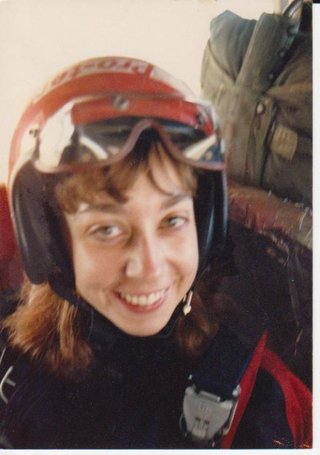 Getting ready to jump out of a "perfectly good airplane" 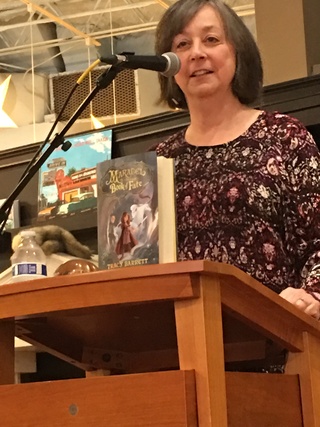 Tracy Barrett has written more than twenty books for children and young adults. She’s much too interested in too many things to stick to one genre, and has published nonfiction as well as historical fiction, mysteries, fantasy, time travel, myth and fairy-tale retellings, and contemporary realistic novels. She knows more about ancient Greece and Rome and the European Middle Ages than anyone really needs to know, can read lots of dead languages, and used to jump out of airplanes.

A grant from the National Endowment for the Humanities to study medieval women writers led to the writing of her first novel, the award-winning Anna of Byzantium (Delacorte). Her most recent publications are a contemporary YA novel, Freefall Summer, which draws on her own skydiving adventures; a middle-grade fantasy entitled Marabel and the Book of Fate; The Song of Orpheus: The Greatest Greek Myths You Never Heard, a collection of little-known Greek myths; and the popular middle-grade series The Sherlock Files.

From 1999 to 2009 Tracy Barrett was the Regional Advisor for the Midsouth (Tennessee and Kentucky) with the Society of Children's Book Writers and Illustrators. She is now SCBWI's Regional Advisor Coordinator.

Tracy grew up near New York City, and went to college in New England and graduate school in California. She holds a Bachelor's Degree with honors in Classics-Archaeology from Brown University and an M.A. and Ph.D. in Medieval Italian Literature from the University of California, Berkeley. She was awarded a grant from the National Endowment for the Humanities to study medieval women writers and won the Society of Children’s Book Writers and Illustrators Work-in-Progress Grant in 2005. She taught Italian and other subjects at Vanderbilt University for almost thirty years. She has two grown children and lives in Tennessee with her husband and two Cavalier King Charles Spaniels. 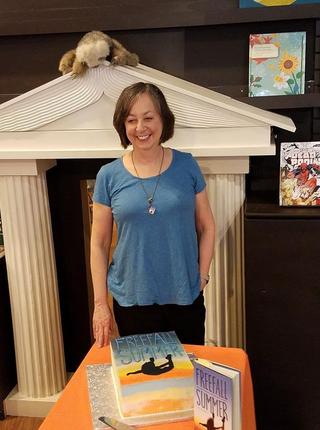 At the launch party for Freefall Summer at Parnassus Books

Tracy has taught courses on writing for children and on children's literature at various institutions and frequently makes presentations to groups of students, librarians, teachers, and others.

In 2012 she resigned from Vanderbilt University, where she had taught Italian, Women's Studies, English, and Humanities. She occasionally manages to combine her two "lives" as scholar and author, as in her presentation at a conference in Wales, on the Classics in children's literature.


More about me
I often get letters asking for more information for school reports. Here is the biographical information that is most often requested:

I was born in Cleveland, Ohio, and grew up mostly in New York state. I went to college in New England and graduate school in California. I now live in Nashville, Tennessee.

The first book I ever read by myself was called Little Bobo and His Blue Jacket. I still have it. I learned to read when I was three, but I know now that this doesn't mean much. My brother didn't really read until he was seven, and now he reads more and remembers it better than I do.

My favorite books when I was growing up were Charlotte's Web; The Phantom Tollbooth; The Lion, the Witch, and the Wardrobe; The Return of the Twelves; The Jungle Book; The Princess and the Goblin; Five Children and It; Mrs. Mike; Pippi Longstocking; Hitty, Her First Hundred Years; The Secret Garden; the first half of The Once and Future King; Emily of New Moon; and poems by William Blake, Ogden Nash, and especially Don Marquis.

As I grew older, my favorites included Kristin Lavransdatter; the second half of The Once and Future King; A Death in the Family; anything by Charles Dickens, especially Bleak House and A Tale of Two Cities; poems by John Donne; essays by E.B. White (the author of Charlotte's Web); and anything by Jane Austen, James Thurber, and George Eliot.

I have a husband, a grown daughter and son, and a father-and-son pair of Cavalier King Charles Spaniels. 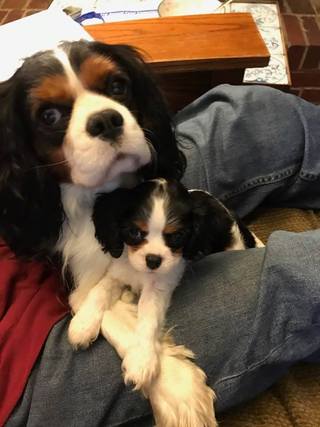 Pericles and Augustus. Their friends call them Perry and Augie, or Augie Doggy and Doggy Daddy (only Boomers will get that reference!).

I taught Italian and other subjects at Vanderbilt University for many years, and I like to travel, especially to Italy, and especially with my family. My other hobby is knitting. I used to skydive (that's how I met my husband—on the ground, not in the air!).

If you have any questions that I haven't answered here or in the interview on the Writing page, you can write to me through the Contact page. I always answer my mail, but I won't do your homework, so please don't ask the theme of one of my books, or ask me to find similes and metaphors, or to tell you anything else that your teacher wants you to figure out on your own!