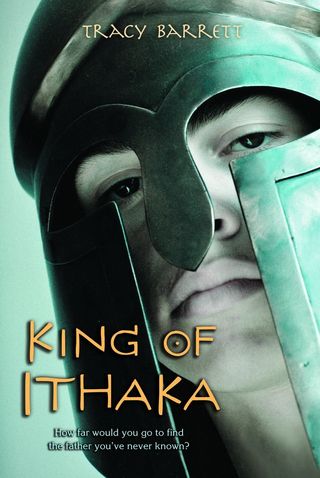 How far would you go to find the father you've never known?

One of School Library Journal's Best Books of 2010: "With vivid characters and nonstop action, this is a perfect introduction to the classic tale."

Accompanied by Brax, a centaur, and runaway weaver Polydora, [Telemachos] discovers that the world is full of dangers, some of them giving the appearance of friendship. He also begins to discover what a good kingship requires by viewing the hurting realms of Pylos and Sparta. Readers familiar with The Odyssey will know some of how the story ends, but Barrett’s depictions of familiar characters and situations are surprising and fresh, allowing a new tale to be told inside the old one. The author also makes much of no one expecting poets to tell the truth, just a good story, and Telemachos’s own narrative ends with the traditional concluding words of a poet that seem to be a tongue-in-cheek commentary on storytelling. This is a strong retelling with definite YA appeal, particularly in Telemachos's final triumph, where he takes the chariot reins of his life in his own hands.
— School Library Journal ★Starred review

[A] rip-roaring adventure as told by Telemachos. His father Odysseus departed for the Trojan War when Telemachos, now 16, was an infant; his mother Penelopeia has kept the peace in Ithaka during Odysseus' absence, but now the people demand a king as they ridicule spoiled Telemachos. . . .
Telemachos struggles with issues of adolescence and coming of age, digging deep for the courage to face the challenges of his journey. Teens will devour the gritty action, savoring the epic characters and mythic creatures.
— School Library Journal Curriculum Connections

In this hero's quest drawn from Homer’s Odyssey, Telemachos, only child of Odysseus, King of Ithaka, has waited 16 years for his wandering father to return from the Trojan wars while his dutiful mother, Penelopeia, fends off would-be suitors. When a stranger challenges him to find his father, Telemachos consults an oracle, who prophesies Ithaka will have a king only after he searches for Odysseus and returns "to the place that is not, on the day that is not, bearing the thing that is not." Adventure follows Telemachos as he sails to Pylos and travels cross country to Sparta with his centaur pal, Brax, and their (human) female chum, Polydora. He chronicles this perilous journey in the first person, allowing readers to witness his metamorphosis from an immature, self-centered youth to an appealing leader who eclipses his famous father in strength, bravery, generosity and compassion, fulfilling the cryptic prophecy. A rousing introduction to epic characters and mythic creatures of ancient Greece from the fresh perspective of an engaging young hero.
— Kirkus

. . . a perfect introduction to the tale of Odysseus.
— Literature for Today's Young Adults

Readers are sure to enjoy a fast-paced story and action-packed journey in this tale of Telemachos, only son of Odysseus…What a great complement for readers of The Odyssey!
— Library Media Connection

Barrett has pulled off an incredible feat of imagination and scholarship. She cuts right to the bone of the ancient story, replacing hackneyed notions of honor and nobility with a tale that's monstrously inventive. King of Ithaka works brilliantly as an introduction to Homer for young readers who haven't read the Odyssey—and even more brilliantly, as a deconstruction, for older readers who have.
— Chapter 16, Nashville City Paper

Barrett does a fine job of making a standalone story that does not stray too far from the classic, and although her characters are less iconic, they are nonetheless heroic, relatable and sympathetic, without being anything like perfect people. Along with interesting details of ancient life, Barrett sneaks in contemporary lessons about prejudice, courage, and compassion.
— VOYA

The tale is full of gripping adventure, close calls and memorable characters, but it is, most of all, Telemachus' coming of age story. He is at the center, foolish, wise, stubborn, crafty, and resilient, and in this odyssey, he is very much the hero. Barrett's retelling is revisionist, and as such, she follows in the footsteps of the ancient tellers, who before the tale was finally written down, revised and remade the story each time it was repeated to a new audience. Like the bards of old, Barrett has written a fresh version of an old tale, one that will completely engage a new audience of young readers.
— The Examined Life: Greek Studies in the Schools

Readers without prior knowledge of the Homeric epics can fully enjoy this as a rousing adventure, but those who are already acquainted with Odysseus' tale will appreciate Barrett's audacious take on the arrogant hero and his milquetoast son.
— Bulletin of the Center for Children's Books

Building on the events of Homer's Odyssey from the point of view of Telemachos, the 16-year-old son of the absent king Odysseus, Barrett . . . crafts a coming-of-age novel full of mythical creatures and questions about what it truly means to be a leader. . . With its focus on Telemachos's determination and growth, Barrett's tale should be an enjoyable and accessible primer for readers who've not yet read the original.
— Publishers Weekly

[T]he exotic climes and vivid descriptions . . . give the story a sense of immediacy and color. Telemachos' first-person narration allows readers to experience the complexity of his character as the prince matures and evolves into a leader that would make any parent proud.
— Booklist

Barrett knows her Greek history, and fills the narrative with delightful references and details that make the characters and setting compelling. An excellent choice for mature young adult readers.
— Children's Literature

In one scene, after a bard tells a story, a character comments, "Nobody expects a poet to tell the truth." It's a clue that things will happen a little differently here than in Homer's Odyssey. After guests in Telemachos' kingdom begin insisting that his mother give up waiting for Odysseus and marry one of them, Telemachos decides to search for the facts about his father. From the beginning, his quest is filled with danger. He consults an oracle better known for killing—and possibly eating—the people who consult her than she is for the usefulness of her advice. Her prophecy, typical of Greek oracles, is bafflingly difficult to interpret - until it proves true.
Telemachos faces one peril after another in his quest, many genuinely terrifying. Although a subplot involving racial prejudice may strike readers as an overused angle on a common theme, except for the target of the prejudice being a centaur, it doesn't overwhelm the story. The ending of King of Ithaka gives Telemachos a strong, satisfying place in a tale where, up to now, he was little more than a bystander.
— Historical Novels

[A] seagoing road trip rife with adventure, as Telemachos journeys to Pylos and Sparta with his centaur friend Brax and love interest Polydora. Telemachos tells his story in graceful, weighty prose that captures its vividness and epic grandeur.
— Nashville Scene

It's a bold act to retell a classic, but Barrett carries it off well, putting a new spin on many of the famous episodes from Homer's epic. King of Ithaka will surely join her earlier efforts, including Cold in Summer, Anna of Byzantium, and the Sherlock Files series, on reading lists everywhere.
— Nashville Scene