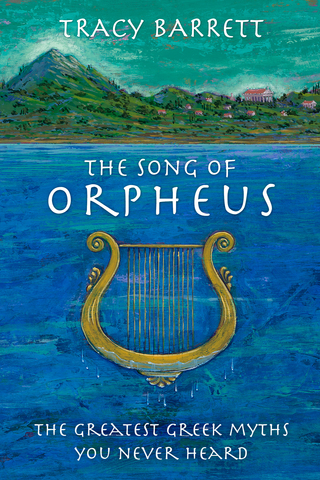 Available in paperback and for Kindle

Seventeen lesser-known Greek myths get an energetic retelling in this collection for readers 12 and up.
Many YA readers are familiar with the immortals of Olympus . . . , but the same tales tend to get repeated, leaving out variations, contradictions, or plots with less appeal to modern audiences. Barrett (On Etruscan Time, 2015, etc.), a prolific writer of YA fiction, returns to the classical setting she employed in books like King of Ithaka (2014) to explore these less-told tales. . . .
Accessible and entertaining, these stories provide a thoughtful, fresh take on a classic subject.
— Kirkus Reviews

Tracy Barrett opens a new adventure in reading Greek myths with her new book. Her collection of myths that are little known will have readers laughing, puzzled by the unexpected twists, and spellbound.
— HubPages

Aside from the fact that so much Western thought originated in and around Greece, making it important to explore as many Greek stories as possible, it’s just plain fun to tell stories that may have been forgotten. Then there’s the popularity of Percy Jackson, 300, and other related stories. Those who enjoy these ancient tales inevitably want more, and here they are. . . .
Well-researched and well-organized, this is a great supplement for social studies or literature.
— 5thGradeReading

[T]he perfect book for Percy Jackson fans who have read every Greek mythology book they can get their hands on but still want more . . . The stories will either be new to most readers or have additional twists and details; all are fascinating stories!
— Pragmatic Mom

Reminiscent of Boccaccio’s Decameron and Chaucer’s The Canterbury Tales in set up and structure&#151a certain context is used to relate further unrelated stories—The Song of Orpheus uses the myth of Orpheus and Eurydice as a trampoline to narrate 17 lesser known/unknown Ancient Greek myths.
Aptly told through by the legendary Ancient Greek musician, poet, and prophet, Orpheus, the myths are short and amusing, some witty and funny, others tragic and instructive in the way of fables.
This collection “will make readers, and especially fans of the Heroes of Olympus series, laugh, gasp, and geek out” just as promised by the synopsis.
— The Book Voucher

[T]he writing sucked me in immediately. It is interactive as Orpheus is directly talking to the reader, conversing, commenting on the stories and pointing out ridiculous situations and inconsistencies, but what made it even cooler to me is personal, the way the author wrote the myths felt like how a family friend used to tell me urban legends when I was a kid so it had a familiar and nostalgic vibe to it. Also, what I really appreciated were the little notes and charts at the end of every chapters -as well as at the very end of the book- helping with the understanding of the different people, gods and species because let’s face it there are way too many not to get confused.
This was a really good read that I would recommend to any Greek Mythology lover. It will succeed in surprising you with new myths, alternate endings, open endings as well as links between different myths that will bring new things to light about stories you already knew, and those lightbulb moments were kind of my favorites as they had me beaming like a stupid person over new pieces added to the never ending Greek Mythology puzzle.
— Word Woonders