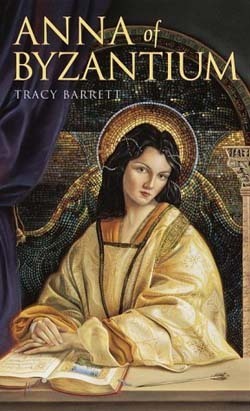 Anna of Byzantium in English . . . 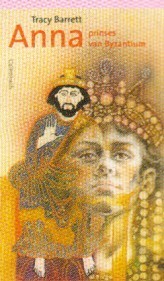 Barrett does a remarkable job of painting moods and emotions with spare, elegant sentences. . . This splendid novel about a neglected period of history is the perfect choice for both teens with historical fiction assignments and avid readers of the genre. . . Hard to imagine it being any better written.
— Voice of Youth Advocates

In the tradition of E. L. Konigsburg's A Proud Taste for Scarlet and Miniver (1973) and Karen Cushman's Catherine, Called Birdy (1994) comes this story of a real-life historical figure, Anna Commena, groomed to be the sovereign of the Byzantine empire. But events intervene, and the birth of a baby brother is just as bad as the invasion of barbarians. Barrett uses an effective first-person narrative to draw readers into Anna's story, and the author's precise use of detail helps re-create Anna's world, the palace of Constantinople in the ninth century. . . Readers will be caught up in Anna's evolution as she moves from loving child and heir of the emperor to pawn in her grandmother's plan to continue as the power behind the throne to discarded princess, stripped of all she holds dear, especially her future. . . The Byzantine empire is often neglected in studies of the Middle Ages. This exciting read—with a particularly enticing cover—will help change that oversight.
— Booklist, boxed review

The first-person device serves well to focus the action on the princess and to build a plausible character study of a brilliant and tempestuous young woman frustrated and embittered by the loss of her expectations of achieving supreme power.
— School Library Journal

Barrett successfully transports the reader to another time in history and holds the reader with a tale of history, mystery and intrigue.
— Children's Literature

Unusual in its focus on the political intrigue among three women&#151Anna, her mother, and her grandmother—this novel paints a detailed picture of palace life one thousand years ago.
— Kathleen Odean, Great Books for Girls, rev. ed.

Based on actual characters and events, this wonderfully engaging novel both entertains and serves as a lively history lesson with its well- researched background, dramatic plot and dimensional characters. Barrett's descriptive, engaging prose will draw readers into a fascinating historical time, filled with political intrigue and a complex, admirable teen protagonist who faces her changing future with an inspiring combination of heart and mind.
— Wichita Eagle

This captivating book introduces an eleventh-century princess, Anna Comnena, who must fight for her birthright when it seems her younger brother will take the throne. Intrigue and strong characterization are the book's hallmarks.
— Booklist Editor's Choices

Writing from a remote mountain convent, Anna reflects ruefully on the missteps that led to her exile, and thereby involves readers in a gripping saga of alliances, intrigues, deceits, and treacheries worthy of a place among the tragic myths. . . Although separated from contemporary readers by foreign custom, social rank, and almost a millennium of Western history, Barrett's protagonist nonetheless commands YA empathy.
— The Bulletin of the Center for Children's Books, starred review, cover story

Barrett's well-educated imagination comes into play as she shows readers through the plot, the dialogue, and Anna's internal monologues that they have much in common with a teenage girl who lived nearly a thousand years ago. . . . I recommend enticing readers to the book by reading Barrett's two-page "Author's Note," clarifying which part of the story comes from historical facts and which part from Barrett's imagination. Barrett's skillful blending provides a good illustration of the writer's craft.
— The English Journal

This story of palace intrigue and a bold young woman will find many fans.
— Infotech

Readers . . . will be grateful for a story that shows readers how much they have in common with a girl who lived nearly a thousand years ago.
— Arizona State University English Education Honor List, 1999